Osho on Dropping an Obsession

Question - Beloved Master, How can one drop an Obsession? Or is it not to be dropped at all, but enjoyed?

Osho - Satya, an obsession simply means a wound in your being, which keeps attracting you again and again, which goes on declaring itself, which wants your attention. You cannot drop it. How can you drop your wound? An obsession is a psychic wound, you cannot drop it. Understand it. Watch it. Pay attention to it. Be meditatively with it. And the more you are meditatively with it, the more it will be healed.

So if you have any obsession, don't call names. The moment you call it an obsession you have already started condemning it. And if you condemn something you cannot watch it -- you are prejudiced against it. How can you watch the enemy? No need to condemn; whatsoever is the case is the case. Just by condemning it you can't change it; by condemning it you can only repress it. You can avoid seeing it, but the wound will continue; it will become cancerous, it will go on growing inside.

Rather than condemning it, rather than calling it names, giving it labels, watch it -- without any conclusion. See what it is. See as deeply as possible, with great friendliness towards it, with intimacy. It is YOUR obsession, YOUR wound! It says something about you, it is part of your biography. It has arisen in you, just as flowers arise in trees. It is essential because it says something about your past. Go deep into it, with care, with love, and you will be surprised: the more care you show about it, the less it hurts, the less it dominates, the less it forces itself upon you.

And everybody is carrying obsessions; our whole society is obsessive. A few obsessions are accepted by the people; then you don't call them obsessions. If they are not accepted, then they become obsessions. In one society one thing is thought to be obsessive, in another society it is not obsessive. It may be even respected, may be thought saintly, holy.

For a Jaina monk, to take a bath is an obsession. People who are taking baths every day once or twice are obsessive; they are too much concerned about their body, body-oriented. The Jaina monk condemns them. The Jaina monk does not take a bath. Jaina monks used to come to see me. It was really a difficult time for me -- they stink! But they think they are doing great austerity.

They don't clean their teeth either -- that too is an obsession. Morning, evening and before you go to bed... and a few people will clean their teeth after each meal, so four, five, six times a day. This IS obsession! You are madly concerned about your teeth. And all arguments that you can give are pointless to them because Jaina monks will say, "Look at the animals. Without any cleansing, without any toothpaste, without any toothbrush, their teeth are absolutely clean. Nature takes care, there is no need to worry about it. You are obsessed."

According to them, you are too much concerned about your body odor, about your breath, about your teeth. And this is materialism, and they are spiritual people! But except a Jaina, nobody will think that these are obsessive things.

Remember one thing: that obsessions differ from society to society, from country to country, from religion to religion. What is really obsession? Anything that becomes a dominating force upon you, that dominates you, that becomes master of your being. Anything that reduces you into a slave, that's my definition of an obsession.

The director of a well-known mental hospital decided to resign his post after many years of service. This decision brought the local press out for an interview.

"Tell us, Doctor, what are your plans? Will you resume private practice?"


"Well, I have given it some thought," replied the doctor. "I may go back into private practice, but on the other hand I may become a tea-kettle."

Now, living with mad people for so long, with so many tea-kettles, he has also become impressed with the idea.

There are people who want to become rich; they become rich. If you persist you can fulfill any kind of stupidity. Man has immense powers. Yes, you can become a tea-kettle if you persist; nobody can prevent you. But then? Then you are suddenly empty. Then suddenly you find yourself without any goal, lost.

The other way is to repress it, to throw it into the basement of your being, somewhere deep in the unconsciousness, so you don't come across it. But it goes on growing there, and it goes on affecting you and your behavior; it goes on pulling your strings from the back. And the enemy is more powerful when it is hidden. You don't see it, but still you have to follow its dictates -- it becomes a dictator.

Both extremes, Satya, have to be avoided. That's what Buddha also would have suggested: Be exactly in the middle, watchful, choicelessly watchful. Neither choose to be identified nor choose to be repressive. Just see. It is a fact of your psychic life, whatsoever it is. Don't say good, bad, XYZ -- whatsoever it is, watch it. And see the tremendous power of watchfulness: how it transforms wounds into flowers, how it releases entangled energy knots into great forces, positive forces, nourishing forces. 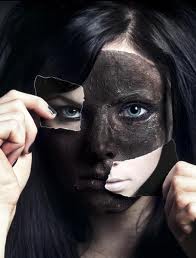