EACH THING IS PERCEIVED THROUGH KNOWING. THE SELF SHINES IN SPACE THROUGH KNOWING. PERCEIVE ONE BEING AS KNOWER AND KNOWN
Whenever you know something, it is known through knowing. The object comes to your mind through the faculty of knowledge. You look at a flower. You know this is a rose flower. Thew rose flower is there and you are inside. Something from you comes to the rose flower, something from you is projected on the rose flower. Some energy moves from you, comes to the rose, takes its form, color and smell, and comes back and informs you that this is a rose flower.

All knowledge, whatsoever you know, is revealed through the faculty of knowing. Knowing is your faculty. Knowledge is gathered through this faculty. But knowing reveals two things: the known and the knower. Whenever you are knowing a rose flower, your knowledge is half if you forget the knower who is knowing it. So while knowing a rose flower there are three things: the rose flower -- the known; and the knower -- you; and the relationship between the two -- knowledge.

So knowledge can be divided into three points: knower, known and knowing. Knowing is just like a bridge between two points -- the subject and the object. Ordinarily your knowledge reveals only the known; the knower remains unrevealed. Ordinarily your knowledge is one-arrowed: it points to the rose but it never points to you. Unless it starts pointing to you, that knowledge will allow you to know about the world, but it will not allow you to know about yourself.

All the techniques of meditation are to reveal the knower. George Gurdjieff used a particular technique just like this. He called it self-remembering. He said that whenever you are knowing something, always remember the knower. Don't forget it in the object. Remember the subject. Just now you are listening to me. When you are listening to me, you can listen in two ways. One: your mind can be focused towards me -- then you forget the listener. Then the speaker is known but the listener is forgotten.

Gurdjieff said that while listening, know the speaker and also know the listener. Your knowledge must be double-arrowed, pointing to two points -- the knower and the known. It must not only flow in one direction towards the object. It must flow simultaneously towards two directions -- the known and the knower. This he called self-remembering.

But a little effort, and by and by you can be aware of both simultaneously. And when you become capable of being aware of both, this Gurdjieff calls self-remembering. This is one of the oldest techniques that Buddha used, and Gurdjieff again introduced it to the western world.

Buddha called is samyak smriti -- right-mindfulness. He said that your mind is not in a right-mindfulness if it knows only one point. It must know both. And then a miracle happen: if you are aware of both the known and the knower, suddenly you become the third -- you are neither. Just by endeavoring to be aware of both the known and the knower, you become the third, you become a witness. A third possibility arises immediately -- a witnessing self comes into being -- because how can you know both? If you are the knower, then you remain fixed to one point. In self-remembering you shift from the fixed point of the knower. Then the knower is your mind and the known is the world, and you become a third point, a consciousness, a witnessing self.

I will try to explain it through an example. In the night you sleep and you dream. In the morning you wake and the dream is lost. While you are awake there is no dream; a different world comes into your view. You move in the streets, you work in a factory or in an office. Then you come back to your home, and again you fall asleep at night. Then this world that you knew while you were awake disappears. Then you don't remember who you are. Then you don't know whether you are black or white, poor or rich, wise or foolish. You don't know anything. You don't know if you are young or old. You don't know if you are man or woman. All that was related with the waking consciousness disappears; you enter the world of dreams. You forget the waking world; it is no more. In the morning, again the dreaming world disappears. You come back.

If you say, `Because it disappears when I am awake,' this cannot be the criterion, because your waking world disappears when you are dreaming. And really, if you argue this way, then the dreaming world may be more real, because while you are awake you can remember the dream, but while you are dreaming you cannot remember the waking consciousness and the world around it. So which is more real and more deep? The dreaming world completely washes away the world that you call real. Your real world cannot wash away the dreaming world so totally; it seems more solid, more real. And what is the criterion? How to say? How to compare?

This method of Gurdjieff's, which he calls self-remembering, or Buddha's method, which he calls right-mindfulness, or this tantra sutra, lead to one thing. They lead within you to a point which is neither to known nor the knower, but a witnessing self which knows both.

EACH THING IS PERCEIVED THROUGH KNOWING.

THE SELF SHINES IN SPACE THROUGH KNOWING.

PERCEIVE ONE BEING AS KNOWER AND KNOWN.

This is the first step -- to concentrate on the rose. If you cannot concentrate on the rose, it will be difficult to move to the knower, because then your mind is always diverted. So concentration becomes the first step towards meditation. Only the rose remains; the whole world has disappeared. Now you can move inwards; now the rose becomes the point from where you can move. Now see the rose, and start becoming aware of yourself -- the knower.

In the beginning you will miss. When you shift to the knower, the rose will drop out of consciousness. It will become faint, it will go away, it will become distant. Again you will come to the rose, and you will forget the self. This hide-and-seek play will go on, but if you persist, sooner or later a moment will come when suddenly you will be in between. The knower, the mind, and the rose will be there, and you will be just in the middle, looking at both. That middle point, that balancing point, is the witness.

PERCEIVE ONE BEING AS KNOWER AND KNOWN.

Start by concentrating on something. When the concentration has come to be total, then try to move inwards, become mindful of yourself, and then try to balance. It will take time -- months, even years. It depends on how intense is your effort, because it is the most subtle balancing to come between the two. But it happens, and when it happens you have reached the center of existence. In that center you are rooted, grounded, silent, blissful, in ecstasy, and duality is no more. This is what Hindus have called samadhi. This is what Jesus called the kingdom of God.

So try to find a face -- any face you love will do -- and just look in the eyes and concentrate on the face. Suddenly the whole world drops; a new dimension has opened. Your mind is concentrated on one thing -- then that person or that thing becomes the whole world.

When I say this, I mean that if your attention is total towards anything, that thing becomes the whole world. You create the world through your attention. Your world you create through your own attention. And when you are totally absorbed, flowing like a river towards the object, then suddenly start becoming aware of the original source from where this attention is flowing. The river is flowing; now become aware of the origin.

That's why so many persons go into retreat. They just leave the world. Leaving the world basically means leaving the object, so that they can concentrate on themselves. It is easy. If you leave the world and close your eyes and close all your senses, you can be aware of yourself easily, but again that awareness is false because you have chosen one point of duality. This is another extreme of the same disease.

Buddha's middle path is based on this technique. It is beautiful. For so many reasons it is beautiful. One: it is very scientific, because only between two can you balance. If there is only one point, imbalance is bound to be there. So Buddha says that those who are worldly are imbalanced, and those who has renounced are again imbalanced in the other extreme. A balanced man is one who is neither in this extreme nor that; he lives just in the middle. You cannot call him worldly, you cannot call him other-worldly. He is free to move; he is not attached to any. He has come to the midpoint, the golden mean.

Secondly: it is very easy to move to the other extreme -- very easy. If you eat too much you can fast easily, but you cannot diet easily. If you talk too much you can go into silence very easily, but you cannot talk less. If you eat too much, it is very easy not to eat at all -- this is another extreme. But to eat moderately, to come to a midpoint, is very difficult. To love a person is easy; to hate a person is easy. To be simply indifferent is very difficult. From one extreme you can move to the other.

To remain in the middle is very difficult. Why? Because in the middle you have to lose your mind. Your mind exists in extremes. Mind means the excess. Mind is always extremist: either you are for or you are against. You cannot be simply neutral. Mind cannot exist in neutrality: it can be here or there -- because mind needs the opposite. It needs to be opposed to something. If it is not opposed to anything it disappears. Then there is no functioning for it; it cannot function.

This balancing will give you a new dimension of feeling where you are both the knower and the known, the world and the other world, this and that, the body and the mind. You are both, and simultaneously neither -- above both. A triangle has come into existence.

You may have seen that many occult, secret societies have used the triangle as their symbol. The triangle is one of the oldest occult symbols just because of this -- because the triangle has three angles. Ordinarily you have only two angles, the third is missing. It is not there yet, it has not evolved. The third angle is beyond both. Both belong to it, they are part of it, and still it is beyond and higher than both.

And he is right, because bliss means when there is no identification of any type -- not even with bliss. This is very subtle. If you feel that you are blissful, sooner or later you will be in misery again. If you feel you are blissful, you are preparing to be miserable again. You are still getting identified with a mood. 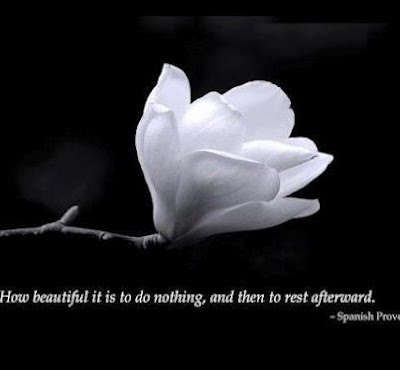