Osho Insights on Gibberish and No Mind Meditation

Osho Insights on Gibberish and No Mind Meditation


1. The bullshit in our heads


Before Nivedano gives his beat for you to go completely crazy, you have to understand the meaning of throwing out your gibberish that is inside your mind, continuously moving .... You are not even aware of it. When you start throwing it out, then you become aware, ”My god, all this bullshit I am carrying in my head!”


And this is the best place to do it, because everybody else is engaged in throwing his bullshit. Nobody is listening to you. You won’t get this chance anywhere else in the world, so you can be absolutely at ease in exposing yourself. Just don’t sit silently, because anybody who is sitting silently – all this gibberish coming from everybody else will enter into his head! I am making you aware, it is a warning: don’t be stupid and don’t sit silently. Defeat all those who are around you. This is just a great chance!

Nivedano, give the first beat to the drum, and everybody goes crazy throwing his gibberish ...


2. Throwing all your craziness out


Now, the first step of meditation is throwing all your craziness out. It is a simple method, if you are not a coward – I mean if you are not a gentleman. It simply means gibberish. Speak any language that you don’t know, or make sounds, but don’t sit there like a buddha; that stage comes later.


Remember, the first step of the meditation is gibberish. And gibberish simply means throwing out your craziness, which is already there in the mind, piled up for centuries. As you throw it out you will find yourself becoming light, becoming more alive, just within two minutes.


In fact in those two minutes, if you put your total energy ... the more you put into it, the deeper will be the following silence. So don’t be partial, don’t be middle-class. Just be a first-rate crazy man!


About women there is no question, they beat every man every day.


The question is that if your mind is silent then even your physical eyes stop moving. You can try it as an experiment. This is the way that psychoanalysts find out whether a sleeping person is dreaming or not. And now, there is much research going on about dreams and dreamless sleep. It has completely overturned the ancient idea. The old idea was that there are a few dreams once in a while, mostly early in the morning when you are going to wake up; otherwise, you sleep soundly.


Modern research says that you dream six hours out of eight. If you sleep eight hours, then for six hours you dream. Those two hours of dreamless sleep are also not solid, but broken here and there – ten minutes here, fifteen minutes there. But this proportion had never been mentioned anywhere in the world before.


And the second revolutionary discovery which has come out of it is that when you are watching somebody sleeping, you can know the type of sleep just by looking at his eyes. They are closed, but if he is dreaming, then you can see that under the eyelids, the eyes are moving. That movement is absolutely clear. It is just like when you read, you have to move your eyes; when you see a film, you have to move your eyes. Dreaming is a kind of film running on the screen of your mind, and the eyes have to move with it.


The traditional wisdom was that if you don’t dream very much, it is a sign of health. The modern researchers have found just the opposite – of course this research is done with ordinary people, not those who are meditating, otherwise the results would be different. They have found that dreaming is a way of throwing away all the dust that people have gathered during the day.

If they don’t dream they will go mad, because every day the dust will go on collecting. Soon they will be surrounded by dust, thick layers of thought, incomplete experiences, all kinds of junk, and they will not be able to find the way out and come back home. Every day, just as you take a bath or clean your teeth, your mind automatically tries to throw away all kinds of dust that has gathered during the day. This needssix hours, so the healthy man dreams six hours and sleeps two hours.


That brings many implications. The researchers have been experimenting with a few people in one lab, and a few people in another lab .... In one lab they try to disturb the people whenever they start dreaming. Whenever they see that their eyes are moving, they wake them up. In the other lab, they wake them up whenever their eyes are not moving. In one lab they disturb their sleep, and in the other they disturb their dreams. And the strange result is that the people whose sleep is disturbed and whose dreams are allowed, wake up profoundly refreshed without any trouble. And the people whose dreams are disturbed and whose sleep is allowed, wake up utterly tired, tattered. It seems that dreams are more significant than sleep. But this research is only confined to non-meditators.


A meditator throws away all the dust himself, he does not wait for the biological sleep to throw it away. He throws it away consciously and with full awareness. Then his sleep becomes a deep silence and also a deep awareness. This awareness has been called the third eye, but the third eye is only a symbol.


What we are doing here every day in meditation ... within two minutes you are throwing away almost six hours’ load. It is a question of totality. Don’t hold back, don’t think of what people will think about you. Here, there is nobody even listening to you. Everybody is so much involved in himself and everybody is competing with everybody else! This throwing away gibberish will reduce your dreams, and if you were brought to be examined for your sleep, the results would be different. Your dreams would be far less and your sleep would be longer.


And a new factor will have arisen in you: a thin line of awareness, which as you go on growing in meditation becomes bigger and bigger. A point comes in that fire of your awareness where all your dreams burn, and only sleep is left. The body sleeps, it is tired – it needs rest. But your consciousness is never tired. It burns bright, day in, day out.

Just today I received a scientific research survey which has astonished scientists – it will astonish anyone. The survey was done on students to check their intelligence. During the test there were machines detecting the activity going on inside the brain. The puzzling conclusion was that the less activity shown, the more intelligence there was. This was absolutely against the traditional idea: a more active mind has to be more intelligent.


That has been the superstition up to now, even in the eyes of science. But this survey confirms something which the mystic has always been saying: No-mind is intelligence. Looking at the survey you can see two things: less activity, more intelligence. The natural conclusion will be, no activity, absolute intelligence. But even the scientists who were doing the survey did not conclude it the way I am concluding it.


Another report I have received is from an institute in America. The institute trains actors for films. The director must have read my books, because he forces every student in the institute to do the Dynamic Meditation, Kundalini Meditation and gibberish. And even those people who had come just to learn the art of acting have, strangely, felt a tremendous opening through gibberish – a silence from the unknown descending and overwhelming them.

5. To be out of the mind is to be in your own being


Only a few idiots may be watching what is happening. Rather than participating they are observing a phenomenal thing. But they will not know the taste when – like after all this rain a coolness comes to you – after gibberish a silence penetrates your being. Gibberish is simply throwing away all garbage.


It is difficult to do it anywhere else because you will wonder what people are going to think. This is the place where nobody is thinking about you. It is your business what you are saying, what you are doing, laughing or crying or speaking Chinese without knowing it... and making gestures. Nobody has time. It is so short that everybody has to do his thing first.


And once you are out of the mind, you are in.


To be in the mind is to be out of yourself.


To be out of the mind is to be in your own being. 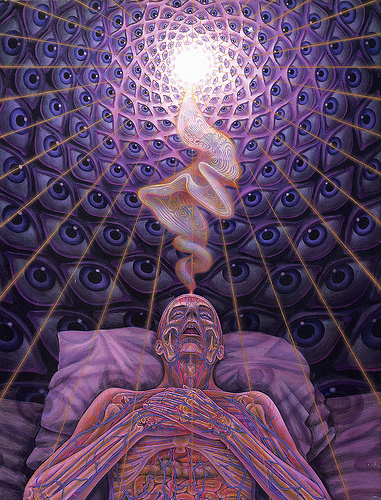