CONSIDER YOUR ESSENCE AS LIGHT RAYS FROM CENTER TO CENTER UP THE
VERTEBRAE, AND SO RISES ”LIVINGNESS” IN YOU. OR IN THE SPACES BETWEEN, FEEL THIS AS LIGHTNING. FEEL THE COSMOS AS A TRANSLUCENT EVER-LIVING PRESENCE.

The second technique:
”OR IN THE SPACES BETWEEN, FEEL THIS AS LIGHTNING.”
This is a very similar method with a slight difference: ”OR IN THE SPACES BETWEEN, FEEL THIS
AS LIGHTNING.” Between one center and another, as rays are coming, you can feel it like lightning
– just a jump of light. For some people the second will be more suitable and for others the ﬁrst. This is why there is a modiﬁcation. There are people who cannot imagine things gradually and there are people who cannot imagine in jumps. If you can think and imagine gradually, then the ﬁrst method is good. But if you try the ﬁrst method and you suddenly feel that from one center the rays jump directly to the second, then don’t do the ﬁrst method. The second is better for you. ”FEEL THIS AS LIGHTNING” – like a spark of light jumping from one center to the next. And the second is more real because, really, light jumps. There is no gradual step-by-step growth. Light is a jump. Look at the electric light. You think it is constant, but that is illusory. There are gaps, but the gaps are so small that you cannot detect them. Electricity comes in jumps. One jump, and then there is a gap of darkness. Another jump, and then there is a gap of darkness. But you never feel the gap because the jump is so fast. Otherwise, every moment there is darkness. Again there is a jump, light comes, then again darkness. Light jumps, it never travels. For those who can conceive of jumps,
the second modiﬁcation is best. ”OR IN THE SPACES BETWEEN, FEEL THIS AS LIGHTNING.”
Just try it. If you feel good with the rays coming gradually, it is okay. If you don’t feel good and rays are jumping, then forget about rays. Think of this as lightning in the sky, in the clouds, just jumping from one place to another. For women the ﬁrst technique will be easier and for men the second. The feminine mind can
conceive of gradualness more easily and the male jumps more easily. The male mind is ”jumpy”; it jumps from one thing to another. There is a subtle uneasiness in the male mind. The female mind has a gradual process, it is not jumpy. That is why female and male logic are very different. A man goes on jumping from one thing to another, and for women this is inconceivable. For them there must be growth – gradual growth. But choose. Try these, and choose whichever you feel is good for you.
Two or three things more about this method. With lightning you may feel such hotness that it may seem unbearable. If you feel that, don’t try it. Lightning can give you much heat. If you feel this, that it is unbearable, then don’t try this. Then with the ﬁrst method, if you are at ease, then it is good. Otherwise with uneasiness don’t try it. Sometimes the explosion can be so great that you may become afraid of it, and once afraid you will never be able to do it again. Then fear enters. So one has to be aware always not to become afraid of anything. If you feel that fear will come and it is too much for you, don’t try it. Then the ﬁrst method with light rays is best. If you feel that even with light rays too much hotness is coming to you – and it depends because people differ – then conceive of the rays as cool, imagine them as cool. Then instead of feeling warmth you will feel a coldness with everything. That too will be effective. So you can decide; try and decide. Remember, with this technique, and with others also, if you feel very uneasy or anything unbearable, don’t do it. There are other methods, and this one may not be for you. With unnecessary disturbance inside,
you will create more problems than you will solve. In India, because of this, we have developed a particular yoga which we call SAHAJ YOGA. SAHAJ means spontaneous, easy, natural. Always remember SAHAJ. If you feel any technique spontaneously coming to you, if you feel more afﬁnity with it, if you feel better with it – more healthy, more alive, more at home – then that is the method for you. Move with it; you can trust it. Don’t create unnecessary problems. And the inner mechanism is very complex. If you do something which is too much for you, you may destroy many things. So it is better to move with something  which feels harmonious to you. 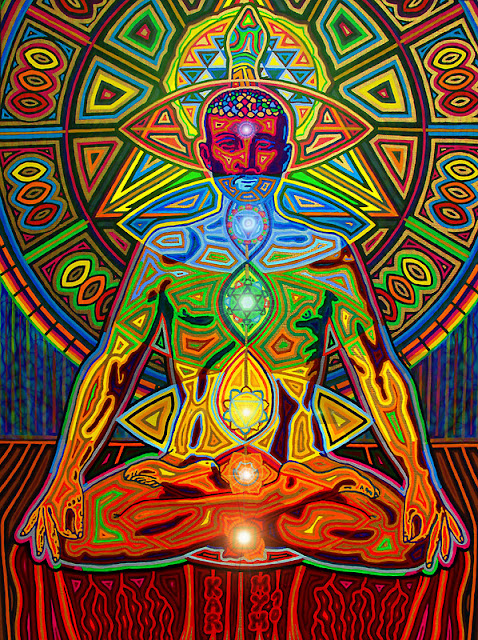