WITH YOUR ENTIRE CONSCIOUSNESS IN THE VERY START OF DESIRE, OF KNOWING, KNOW


WITH YOUR ENTIRE CONSCIOUSNESS IN THE VERY START OF DESIRE, OF KNOWING, KNOW

The basic thing about this technique is ENTIRE CONSCIOUSNESS. If you can bring your entire consciousness to anything, it will become a transforming force. The transformation happens whenever you are entire in it -- in anything. But that is difficult, because wherever we are, we are only there in part, never in entirety.

You are here listening to me. This very listening can become a transformation. If you are entirely here, this very moment here and now, if listening is your entirety, that listening will become a meditation: you will enter a different realm of ecstasy, a separate reality. But you are not entire. That is the problem with the human mind, it is always partial. A part is listening. Other parts may be somewhere else, or may be asleep, or may be thinking about what is being said, or arguing inside. That creates a division and division is a dissipation of energy. So when doing anything bring your entire being to it. When you are not holding anything back, not even a minor part is separate, when you have taken a jump, total, whole, your whole being has come into it, then any act becomes meditative.

It is reported that one day Rinzai was working in his garden -- Rinzai was a Zen master -- and somebody approached. The man had come to ask some philosophical questions. He was a philosophical seeker. He didn't know that the man who was working in the garden was Rinzai himself. He thought he must be a gardener, a servant, so he asked, "Where is Rinzai?" Rinzai said,"Rinzai is always here." Of course, the man thought that this gardener seemed to be mad because he said that Rinzai was always here. So he thought it would not be good to ask anything of this man again and he started moving off to ask someone else. Rinzai said, "Don't go anywhere, because you will not find him anywhere. He is always here." But he escaped from this madman.

Then he inquired from others and they said, "The first man you met is Rinzai." So he came back and said, "Forgive me, I am sorry, I thought you were mad. I have come to inquire about something. I want to now what truth is. What should I do to know it?" Rinzai said, "Do whatsoever you want to do, but do it entirely."

"For example," Rinzai said, "when I am digging this hole in the earth, my entirely is there in the act of digging. There is no Rinzai left behind. The whole has gone into the digging. Really there is no digger left, only the digging. If the digger is left, then you are divided."

You are listening to me. If the listener is left, then you are not entire. If there is only listening and there is no listener left behind you are entire, here and now. Then this very moment becomes a meditation. In this sutra Shiva says, WITH YOUR ENTIRE CONSCIOUSNESS IN THE VERY START OF DESIRE, OF KNOWING, KNOW. If a desire arises within you, Tantra doesn't say to fight it. That is futile. No one can fight a desire. It is foolish also, because whenever you start fighting with something within you, you are fighting with yourself, you will become schizophrenic, your personality will be split. And all these so-called religions have helped humanity to by and by become schizophrenic.


Everybody is split, everybody is divided and fighting with himself because so-called religions have told you, "This is bad. Don't do this." If the desire comes, what to do? You go on fighting with the desire. Tantra says don't fight the desire. But that doesn't mean that you become a victim of it. That doesn't mean that you indulge in it. Tantra gives you a very subtle technique. When desire arises, be alert just at the beginning with your entirety. Look at it with your entirety. Become the look. Don't leave the looker behind. Bring your total consciousness to this arising desire. This is a very subtle method, but wonderful. Miraculous are its effects.

Three things have to be understood. Firstly, when desire has already arisen you cannot do anything. Then it will take its full course, it will complete its circle, and you cannot do anything. Just in the beginning something can be done -- the seed should be burned then and there. Once the seed has sprouted and the tree has started growing, it is difficult, almost impossible, to do something. Whatsoever you do will create more anguish, dissipation of energy, frustration, weakness. When the desire arises, just at the beginning, just at the first glimpse, the first flicker that a desire is arising, bring your total consciousness, the entirety of your being to look at it.


Don't do anything. Nothing else is needed. With the entire being the look is so fiery that the seed is burned, with no struggle, with no conflict, with no antagonism. Just a deep look with the entire being and the arriving desire disappears completely. And when a desire disappears without a fight, it leaves you so powerful, with such immense energy, with such tremendous awareness, you cannot imagine it. If you fight, you will be defeated. Even if you are not defeated and you defeat the desire, that too will amount to the same thing. No energy will be left. You will feel frustrated whether you win or get defeated.


In both cases you will be weak in the end, because the desire was fighting with your energy and you were fighting with the same energy. The energy was coming from the same source, you were taking from the same source -- so the source will be weakened whatsoever the result. But if the desire disappears just in the beginning, without any conflict -- remember, this is basic -- without any fight, with just a look, not even an antagonistic look, not even with a mind to destroy, with no enmity, just a total look, in the intensity of that total look the seed is burnt. And when the desire, arising desire, disappears, just like smoke in the sky, you are left with tremendous energy -- that very energy is bliss. That will give you a beauty of its own, a grace.

The so-called saints who are fighting their desires are always ugly. When I say ugly, I mean they are always mean, fighting. Their whole personality becomes graceless. And they are always weak, always lacking energy, because all their energy is used up in the inner fight. A Buddha is totally different. And the grace that has come to Buddha's personality is the grace of desires disappearing without any struggle or fight, without any inner violence.

WITH YOUR ENTIRE CONSCIOUSNESS IN THE VERY START OF DESIRE, OF KNOWING, KNOW. In that very moment simply know, look, see. Don't do anything. Nothing else is needed. All that is needed is that your total being should be there present. Your total presence is needed. This is one of the secrets of achieving the ultimate enlightenment without any violence. And remember, you cannot enter into the kingdom of God with violence. No, those doors shall never open for you, howsoever much you knock. Knock and go on knocking. You may break your head but those doors will never open. 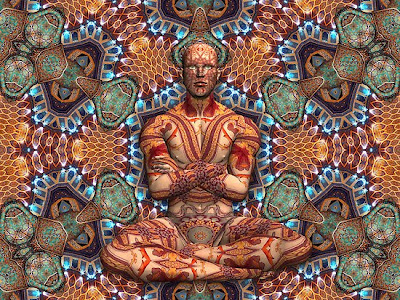