Osho - The same! You are hearing an instrument -- a sitar, or anything. Many notes are there. Be alert and listen to the central core, the backbone of it around which all the notes are flowing, the deepest current which holds all the notes together -- that which is central, just like your backbone. The whole body is held by the backbone. Listening to the music, be alert, penetrate the music, and find the backbone of it -- the central thing which goes on flowing, holding everything together. Notes come and go and disappear, but the central core flows on. Become aware of it.

It is said that when the musician has really become the musician, he will break his instrument -- because it is of no use. If he still needs his instrument, he is not a real musician yet. He is just learning. If you can play with music, with meditation, sooner or later the inner music will become more important, and the outer will become not only less important: ultimately it will become a disturbance.


If your consciousness moves inside and can find the inner music, then the outer music will be a disturbance. You will throw the sitar, you will throw the instrument away from you, because now you have found the inner instrument. But it cannot be found without the outer; with the outer you can become alert more easily. Once you have become alert, leave the outer and move inwards. And for the listener also, the same!

But what are you doing when you listen to music? You are not meditating. On the contrary, you are using music as something like alcohol. You are using it to be relaxed, you are using it for self-forgetfulness. This is the misfortune, the misery: the techniques which were developed for awareness are being used for sleep. And this is how man goes on doing mischief with himself.

If something is given to you which can make you awake, you will use it to make yourself more sleepy. That is why for millennia teachings were kept secret -- because it was thought to be useless to give techniques to a sleepy man. He will use them for sleep; he cannot do otherwise. So techniques were given only to particular disciples who were ready to shake their sleep, who were ready to be shattered out of their sleepiness.

Ouspensky dedicates one book to George Gurdjieff as "the man who disturbed my sleep." Such people ARE disturbers. Persons like Gurdjieff or Buddha or Jesus, they are disturbers. That is why we take revenge upon them. Whosoever disturbs our sleep, we will crucify him. He doesn't look good to us. We may have been dreaming beautiful dreams and he comes and disturbs our sleep. We want to kill him. The dream was so beautiful.

The dream may be beautiful and I may not be beautiful, but one thing is certain: it is a dream, and futile, useless! And if it is beautiful, then it is more dangerous because it can attract you more, it can become a drug.

We have been using music as a drug, dancing as a drug. And if you want to use music and dancing as drugs, then they will become not only drugs for your sleep, they will become drugs for sexuality also. So remember this point: sexuality and sleep go together. The more sleepy the person, the more sexual; the more awake, the less sexual. Sex is basically rooted in sleep. When you awake you will be more loving, the whole energy of sex will have been transformed to love.

And then you will know what is to be known, or what is worth knowing. You will become omnipresent With the music, finding the composite central core, you will become awake, and with that awakening you will be everywhere.

The finiteness is with the mind.

The infiniteness enters with meditation. 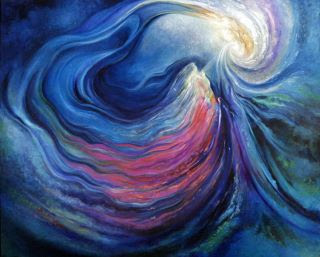